Windows 3.11, released in 1992, was probably the first OS to ship with a selection of screensavers. You could choose from the following savers:

In Marquee mode, you could specify a line of text which would scroll across the screen. Mystify drew some jangly polygons that would bounce around your screen, leaving little trails behind them.

Starfield sticks out a little bit because Microsoft tagged 'Simulation' on the end, giving it a tone of authenticity. You weren't just customizing your computer, you were 'running a simulation.' In the setup screen, you could choose the starfield density, as well as your 'warp speed': 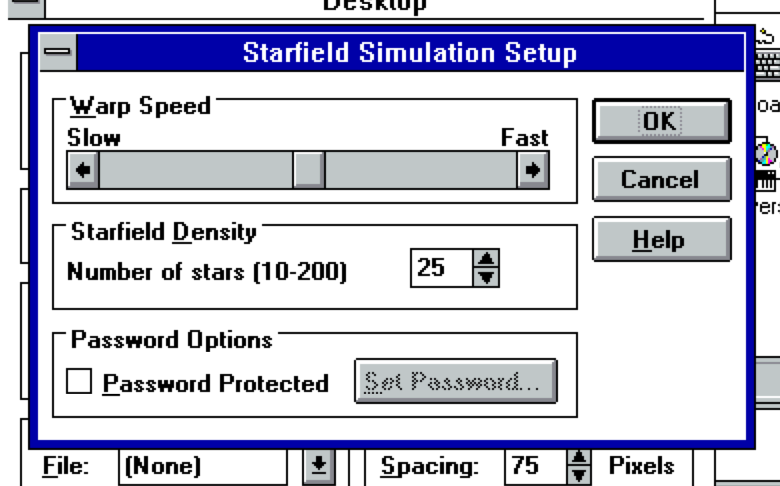 After Dark, which was released for Macs in 1989, and for Windows in 1991, already had a 'warp' screen saver. But what came before that?

Starfields have been around since at least when Star Trek was on television, if not before. There's a description of how it was made in the * October 1967 American Cinematographer*, which I found on The Trek BBS:

Other space shows have shown spacecraft more or less "drifting" through space. We wanted to avoid that cliche. The solution did not come easily or quickly. We experimented with dozens of ideas before we hit on an effective solution.

The principal elements in our solution are a space sky and the use of an Oxberry optical printer. To make the space sky, we painted black stars on a white background about 2 1/2 feet by 3 feet, arriving at a suitable design. We then made a series of black-out mattes that we could use later with the sky in the optical printer. This sort of camera trick, and others like it, is how starfields were made in television and movies for years.

You can get a pretty good idea of what it looked like here:

I spent awhile looking for early computer versions of the starfield. I'm sure there's others, but here's one I found from Star Raiders, an Atari game from the early 80s:

The star field is drawn in a graphics mode that (at full screen coverage) provides 160×96 bitmapped pixels with a palette of four colors. This mode is called "GRAPHICS 7" in Atari BASIC. The use of an indirect palette means that color changes associated with the presence or absence of energy shields, emergency alarms, and the screen flash representing destruction of the ship can be accomplished by simply changing the palette values in memory registers.

I decided to make a version of the Windows Starfield. The code is pretty simple, and uses Processing's 3D mode. Stars are randomly placed in a 3D space, and the camera is moved forward through the space. As stars move behind the camera, their position is reset to a spot in the distance. It's pretty simple, but certainly works. I used squares instead of circles because they render faster, and unless you're looking closely, you can't really tell the difference anyway.

If someone was going to make Flying Windows today, it would almost certainly be emoji-based. I took my starfield code and updated it to use a collection of emoji glyphs. So here's an emoji version: